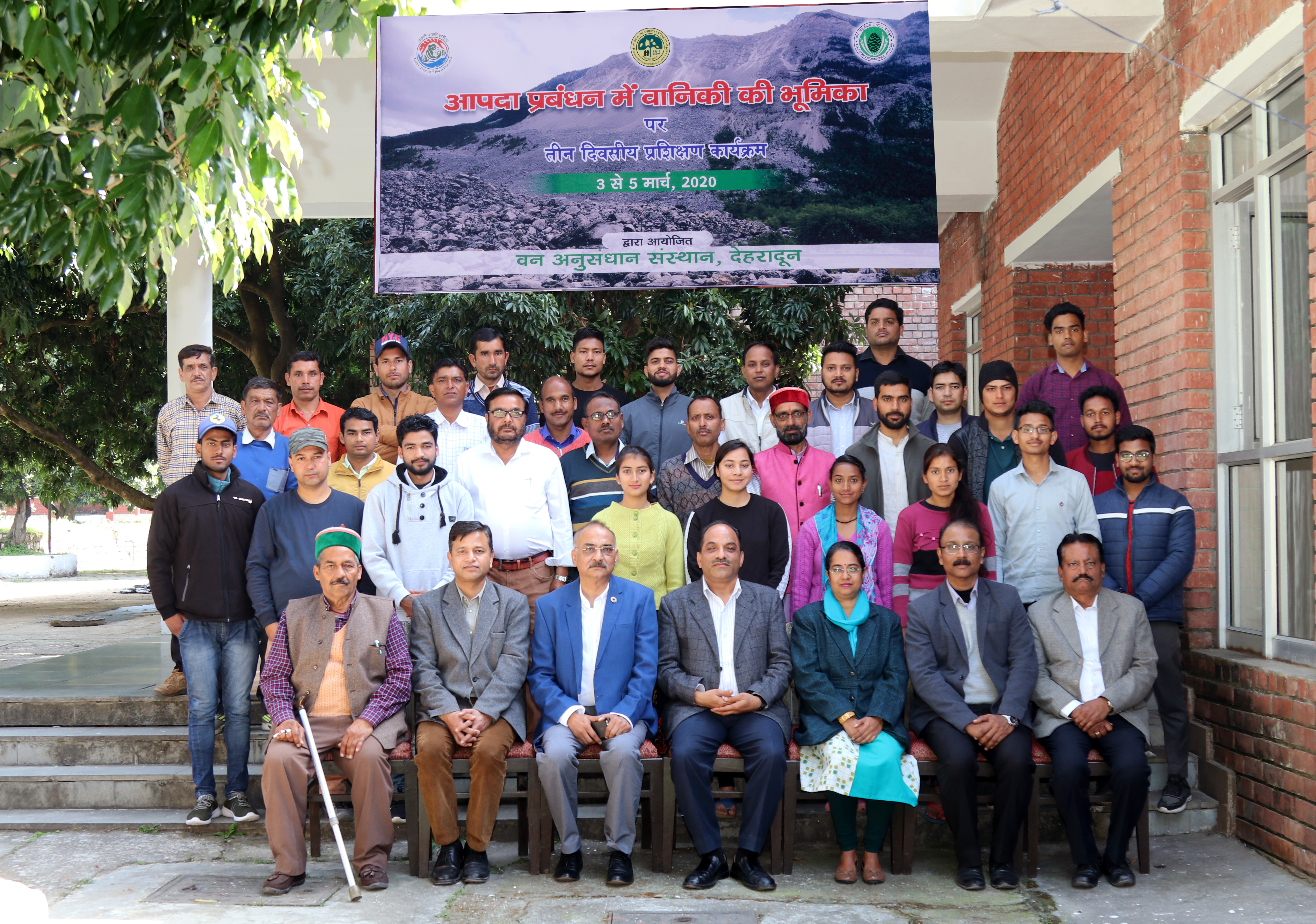 TRAINING PROGRAMME ON “ROLE OF FORESTRY IN DISASTER MANAGEMENT” ORGANISED BY FRI, DEHRADUN (3rd to 5th March 2020) Forest Research Institute, Dehradun is organizing training for the officers of forest departments, members of Nehru Yuwa Kendra and Sarpanch of Van Panchayats from 3 to 5 March 2020. The topic of training is “Role of Forestry in Disaster Management “. Natural disasters such as earthquakes, volcanic eruptions, landslides, tsunamis, floods, droughts, wildfires, winter storms and snow avalanches cause loss of lives, property and livelihoods. Forests play important roles in reducing landslide risk through various mechanisms. Mangrove forests in coastal areas reduce the velocity of tsunami and oceanic tides. Tree roots reinforce soil layers, anchor the soil to bedrock and form buttresses against soil movement. Trees also reduce landslide risk by lowering soil moisture levels – interception, evaporation and transpiration are the primary mechanisms. The expansion of population near forest areas can cause forest disasters like forest fire and man-animal conflicts which can damage lives and properties of the people especially in the Himalayan regions. Every year, many people reside near forests are killed by leopards, elephants and tigers in the country. The frequency of cloud bursts, landslides and flash floods in the hilly terrains are now increasing in the rainy seasons. The basic purpose of the training is to sensitize the participants aware of the extent damage caused by the disasters due to natural and manmade calamities and how forests can play important role in reducing disasters. The reasons for occurrence of forest fire and landslides, the steps that can be taken to prevent or minimize the losses due to fire and landslides by use of various Remote Sensing and Geographic Information System tools and by developing a strong network between other departments of the government and Joint Forest Management Committees (JFMCs) so that massive forest disasters and wildlife conflicts can be controlled. To enlighten the participants on the issue lectures of faculties from institutes like Uttarakhand forest department, Forest Survey of India, State Disaster Management Authority, Uttarakhand and FRI are arranged. The training was inaugurated by Sh. S.D. Sharma, Dy. Director General (Research), ICFRE. He explained participants about various types of disasters (natural and manmade) in India and how these disasters can be mitigated with the help of forestry interventions. He highlighted many examples wherein forests controlled landslides in Himalayan region and tsunami in coastal areas. He also advised to participants to learn new methods and technologies developed like GIS and Remote Sensing for prevention and control of forest fires from this training program. He told that Forest fire is continued degrading forests as frequency of forest fires are increasing in the country. Forest departments should be well prepared before fire season for controlling forest fires. He emphasized that fire lines and any fuel materials lying on the forest floor should be cleared before fire season so that fire may not be extended in larger areas. For that, sufficient funds should be provided by the state governments. The crew members and local community should participate actively for combating forest fire to safe guard forest for generations. The Course Director of the training Mrs. Arti Chaudhary Head, Silviculture and Forest Management Division of FRI welcomed participants and emphasized on advance preparation for mitigation of disasters especially in the Himalayan regions. She also highlighted on the design of the training course keeping in view of the new methods and technologies developed for mitigation of disasters. Dr. Dinesh Kumar, Scientist from FRI said that the technology applied for controlling disasters should be applied in such a way that it should be perfect in mitigation of disasters at low costs. He also told that FRI is playing very good role in organizing such capacity building programmes. Sh. S.K. Thomas, Assistant Silviculturist FRI organized the training program.